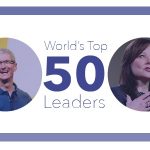 Fortune has come up with a new list on who they believe to be the worlds top 50 greatest leaders.

Here are the top ten leaders in this list:

Cook had big shoes to fill when replacing Steve Jobs. However, he has done a wonderful in leading Apple since 2011. Apple’s stock has hit all time highs- Apple Pay and Apple Watch have reflected the new push towards innovation, and the company has started to show social impact in different

Draghi has arguably one of the toughest jobs in the world. Recently, he has been moving towards improving growth and stability in the eurozone. His long experience in business and politics has allowed him to fill the leadership void that existed before.

Jinping has done a number of important things for China:

Many Veteran China watchers consider him a true leader, and are calling this the most interesting time in China in decades.

Since becoming pope in 2013, Francis has had an innovative vision, fortitude and commitment to reform of the Roman Catholic Church. Pope Francis lives his own lessons and message. He resigned to living in the Apostolic Palace to reside in a one bedroom guesthouse. He has also replaced the boards of the Vatican Bank and is pushing to ensure that as much money possible can go to charity.

Modi became Prime Minister of India at a time of economic turmoil. In his first year of office, he has already begun to deliver his promises, much unlike his predecessors.

He has made genuine progress in:

These advances and more have led institutions such as the IMF to forecast that India will attain a faster growing rate than China in a year or two.

Taylor Swift has proved herself worthy of being the highest-paid woman in the music industry. She has crossed swords with Spotify, embraced corporate sponsorship and moved to secure dozens of trademarks

The Canadian-born physician has worked with MSF since 1996. She was named the group’s international president in October 2013. One of her most significant projects so far has been dealing with the Ebola outbreak successfully. Liu helped organize a fast and aggressive response to the virus, and established field hospitals in the middle of the hot zone. The pressure worked ant for the time being, the disease has been contained.

The Chief Justice of the United States has commanded universal respect, even from the far older members of the ferociously polarized panel. He leads 180 appellate judges, 680 district judges, 350 bankrupcy judges, 550 magistrate judges and the 28-judge Judicial Conference.

His votes (and behind-the-scenes influence) is likely going to determine if Obamacare survives and same-sex marriage becomes a constitutional right.

Barra was thrown into the ignition-switch megacrisis since day one as CEO. She has juggled the demands of investors, regulators, customers, plantiffs and employees on one of the business world’s most visible stages.

Barra is a company lifer, but her insistence on greater openness broke the long-standing GM pattern of downplaying responses to product defects.

18- year old Wong is a co-founder of the student-activist group Scholarism. His non-violent protest message and energetic idealism galvanized crowds that now number in the hundreds of thousands.

These fantastic leaders share something in common: they are all innovators.  Their ideas have gone against the status quo and thus have proven them to be real leaders and

Read the original list here, and keep posted for the next batch of top 50 leaders by Fortune.