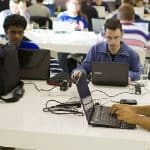 After three days and two nights, KNOLSKAPE’s Education Hackathon commenced. The event was a  lot of fun and hard work to plan and it was a grand success.

A day before the hack, the teams were decided, named and an exclusive website for the Hackathon was created. We had 6 teams in total with 4 members in each of them.

Getting into the groove on Day 1 was unexpectedly difficult. The teams had to phase out other ongoing projects and had to bang their heads towards discussing their ideas further and the possible hiccups they would face. These discussions went on through dinner as well until finally the day was wrapped up with odd looking design mockups and work-in-progress prototypes.

Day 2 saw more of a tense atmosphere, with the realization that time was running out to design, build and deploy a working version of the teams’ ideas. There was also a techslash post-lunch where the teams had to present the progress they had made till then. All the teams realized that without a night-out on Day 2, it was impossible to get things done before the judges’ presentations the next day.

Day 3, final day of the hack the energy levels were on an all time high as everyone was on a kind of high alert. It was a race against time. Products needed to be complete, PPTs were to be made, errors needed to be corrected.

On our judging panel, we had 2 eminent professionals from the corporate world and our very own Mr Rajiv Jayaraman!

Mr. Jacob Singh, Jacob leads Acquia India. Acquia is the company founded by Dries Buytaert, the founder of the Drupal Project. Prior to heading to India to start operations here, Jacob lead teams at Acquia building Acquia Search and Drupal Gardens – the 2 most popular and successful offerings in Acquia’s Product Catalogue.

Mr. Bahubali Shete Mr. Shete is the MD of Connovate Technologies, the company behind the recent crowdfunding sensation Gecko. Gecko is a tiny, low-powered bluetooth device that can connect to your phone and can potentially have numerous applications.

The third and the surprise judge for the afternoon was Mr. Rajiv Jayaraman, the Founder-CEO of KNOLSKAPE. It was key to have him with us as one of the judges so that we could get an internal critique to challenge our hacks and provide a direction for it in alignment with the company’s roadmap.

With three tech gurus on the judging panel, our teams were excited and nervous at the same time. The advantage of having such an eminent panel of judges showed when they had comments and ideas that the teams hadn’t thought of up until that point.

The judges mentioned it was not easy to pick between some of the ideas and eventually the teams were ranked on four criteria – novelty of the idea, completeness of the product, design and usability, and monetization.

The team who aced these criterias and emerged as the winner was team JSON, aka Jarring Squad Of Nerds, who won the Hackathon hands down with almost perfect scores 39/40. This team had Vijay, Chaithanya, Vamsee and Anushree.

Proud owners of the prizes and the cool pair of sunglasses from Jacob.

We asked the winners what was the secret behind their success and what problems did they face and how they came about the winning idea. Here is what they had to say.

in real-time or later. It is a software application primarily created to enrich the experience on the Main Screen.

1) What triggered the idea?

Every time we see a long presentation with uninterrupted monologues, only question that came to our mind was – how can we make the presentation more experiential? more interactive? How about giving real time feedback? This was the starting point for our idea.

2) How does it feel to win?How would you rate your competitors?

As cliched as it may sound, we were not looking to win and the focus was on building a useful product. I think that paid off in the end. We had a hands-on demo that judges could interact with.

The competition was crazy and I think we had as much chance as any other team.

3) What did you enjoy the most during the process?

Solution Design. For the first one day of the hackathon, we did not write more than ten lines of code. Our focus was on getting the architecture right.This was the first time we were working on real-time push server technology and designing the data models for this was awesome fun. Besides technology, A2B breakfast was something we were looking forward to

4) What is the one most important learning out of the Hackathon?

During the initial presentation, we were hit with an array of questions about how this was different from WebEx, wouldn’t it be a distraction to the audience etc., We were pretty confident that once we have the prototype, we could convince that this definitely adds a lot of value to any presentations.

So, I guess it boils down to believing in yourself and committing to your idea.

Prioritising and planning. We clearly had a huge list of things to implement and choosing what to do for the final demo was a major challenge. We applied a lot of thought into which features would give us biggest value for the time we spend on them. (Even if it meant two night-outs in a row)

Here is what they had to say about the inception of their idea and the technical issues they faced during the implementation,

1)What triggered the idea?

There were multiple trigger points for the idea – the primary being our customers’ feedback after the simulation workshop requesting for more touch points and interaction.

2)How does it feel to win?How would you rate your competitors?

It feels exhilarated to have finished runners-up. We knew we had quite a decent idea that would compliment KNOLSKAPE’s offerings, but we had to implement it in the best possible way. And the developers in our team had almost no experience developing for the mobile.

We were up against ideas that included 3D simulations, PPTs re-imagined, a gamified elearning portal and so the competition was quite tough. In a way this was a blessing since it pushed us to deliver an app that was beyond what we had thought it would be.

3)What did you enjoy the most during the process?

Enjoyed the stress and the small wins after every challenge was overcome.

4)What is the one most important learning out of the Hackathon?

We were hit with the following issues:

1) Our idea relied heavily on flash-cards and the flip animation that would accompany them. The animation caused performance issues and hence we had to switch to a CSS based solution (rather than JS).

2) The technology we had selected for the mobile – jQuery mobile did not respond well with the UI framework we had used – Angular.js and hence had to opt for a new technology altogether in the middle of the hackathon.

3) There were no ready-made flip-cards available. We had to build and design it from scratch

4) Adding many types of content – quizzes, images, videos, radio buttons onto flashcards was an arduous task

Apart from the winning teams, the team that had the most visually exciting and engaging product and which won the Audience Choice Hack were the Undead Pirates. They built a 3D Culture Sim. Let’s see what were their success points and what problems they faced.

1) What triggered the idea?

Role playing games like GTA inspired us to come up with 3D Culture Simulation. Since our KNOLSKAPE simulations are already roleplaying in nature we wanted to bridge the gap between these parallels by making a 3D game which maintains the element of fun while it also teaches.

2)How does it feel to win the Audience Hack Award? How would you rate your competitors?

We feel our idea is the next big step in gamified learning. Our endeavour is a first-step towards something that holds limitless possibilities and the impact of which could be ground-breaking in the field of education.

We have had a good competition since most of the teams had great ideas and we were embarking on something that we had no prior experience in.

3)What did you enjoy the most during the process?

Its always fun developing a game and most interesting part was experimenting with 3D objects in the game-engine, scripting for the AI, etc.

4)What is the one most important learning out of the Hackathon?

Planning is the cornerstone of success in any endeavour.

Everything was new during the development phase, getting acquainted with the interface, exploring pre-defined functions in C#, js of the game-engine and working with limited assets.

Here is a look at the snapshot of their sim.

The other teams were not far behind. It was a close competition and all the ideas were great. Below are the teams and their ideas/products.

Product Idea : How many sites do you search when you are trying to learn a new subject? Is there one dashboard that will have videos, courses, articles, wiki pages all related to the subject you want to master? There is, now – Meet Hacko Search !!! And you’ll feel lucky because all content here is guaranteed to be the best.

Product Idea: Knoltimez is an app created just for Knolskape employees. Its a hands on guide for the employees. You have tabs for Runs going on,Blog posts,Knowledge sharing,Social posts queries, Information on the products,Sales,Projects , awarding badges etc.A mini Knolskape in your hands, just so that your are updated and aware of what is going on in your company and are connected with each other.

PREP is an engagement tool to bridge the gap between offer and joining. It is an online training and engagement  platform that can be used by recruiters to keep the new recruits engaged till  they join the organization

At the end of the day what mattered was the sheer passion we saw within all the teams not just to compete but to build products that will eventually solve certain problem in the education field.

The Hackathon was a huge success and the happiest and most inspired person amongst all was our CEO Rajiv Jayaraman, here is what he had to say to the teams – “Pat yourselves on the back! It was an awesome hackathon. It was truly refreshing to see so many new ideas and great implementations. Loved all the presentations. Thanks everyone for making this a huge success”.